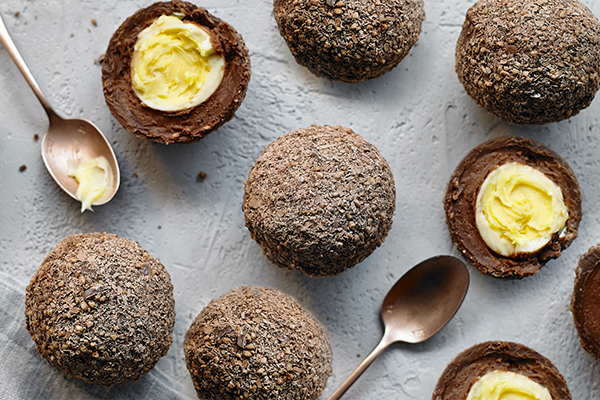 Heston from Waitrose The Chocolate Scotch Egg looks from the outside to be a traditional summer favourite, however on closer inspection, chocolate-lovers will be delighted to discover a sweeter alternative; a zesty mango and yuzu fondant yolk is encased in a smoked milk chocolate caramel ganache in the shape of an egg and coated with milk chocolate, maple-crunch breadcrumbs.

A must-have for an Easter picnic or party, Heston’s Scotch egg has a mango and citrussy yuzu fondant ‘yolk’, wrapped in a delicately smoked milk chocolate caramel ganache ‘meat’ that is then topped with milk chocolate maple crunch breadcrumbs.

“In previous years we’ve taken the idea of the typical chocolate egg and reinvented it with an unexpected twist. This year, my Scotch egg does this in a way you wouldn’t expect – sparking the imagination as you cut into it to find a curious surprise.” – Heston Blumenthal

Heston from Waitrose The Chocolate Scotch Egg £6/110g will launch in Waitrose shops from March 2019.