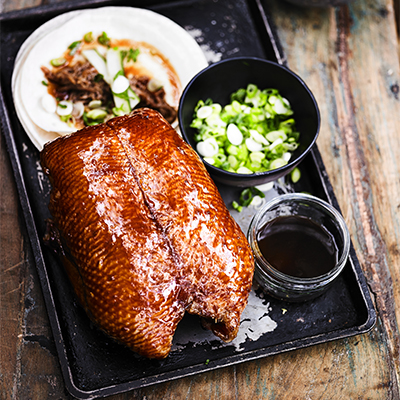 Place the duck in the fridge, uncovered for 48 hours if you cannot source dry-aged duck. Combine the malt syrup, honey, glucose, tamari, ground cardamom, Szechuan pepper, cinnamon, ginger and star anise in a bowl. Mix well and set aside.

Preheat the 4K BBQ by placing 150g charcoal on top of the charcoal grid. Press the fast flame ignition and fill the water container. Stack the charcoal to the righthand side of the barbecue and set both high grills into place. Aim to maintain an ambient temperature of 110-130°C by keeping both vents on setting 3 and topping up the coals as necessary.

Remove the legs from the duck and place the legs onto the cooler side of the BBQ, skin-side up. Return the crown to the fridge. After 30-45 minutes, add one tablespoon smoking chips onto the hot coals and continue to do so every half hour for 3 hours. Remove the legs from the BBQ, they should be tender and flaky. Set aside for 5 minutes to cool slightly before using two forks to pull the meat apart into shreds.

Continue to maintain an ambient temperature of 110-130°C by topping up the coals as needed. Place the crown onto the cooler side of the BBQ and insert the meat probe into the centre of the thickest part of the duck breast. Close the hood and cook for an hour. Generously brush the crown at least twice before the core temperature reaches 45°C and the fat has rendered from the duck. The surface will be dry and it will be ready to roast. Remove the crown from the BBQ and set aside while you heat the BBQ up again by adding 300g charcoal. Leave the hood open for 10 minutes before closing the hood and allowing the ambient temperature to rise to 300°C.

Coat the crown one last time with the remaining glaze and place back onto the BBQ. Insert the probe into the thickest part of the breast and cook with the hood closed for 8-10 minutes until the core temperature reads 54°C and the skin is golden and crispy. Remove the crown and place on a cooling rack set over a tray for 10 minutes. The temperature will rise to 58°C. Thinly slice and serve alongside the shredded duck legs (into which a tablespoon of Hoisin sauce has been mixed), pancakes, sliced cucumber and spring onions.