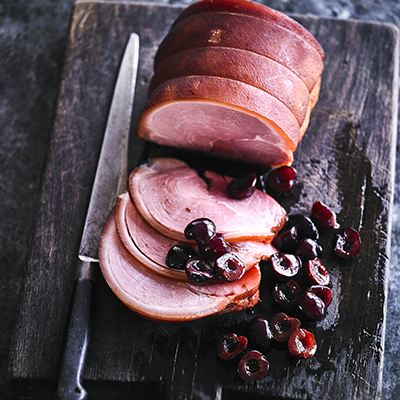 To pickle the cherries, combine the vinegar, sugar and 150g water in a pan. Gently heat until the sugar has dissolved. Remove from the heat and allow to cool before adding the cherries. Refrigerate overnight to pickle.

To cook the ham, preheat the Force or Furnace BBQ (with grill plates on both sides) and one gas ring on low (aim for 150-160°C). Add the pomegranate juice, golden syrup and Sherry vinegar to a pan large enough to hold the gammon and bring to a gentle simmer. Place the gammon into the pan skin side up so that at least half of it is submerged. Cover the pan with greaseproof paper and tin foil, then place the pan on the cold side of the BBQ. Turn the ham every 30 minutes. After 1.5 hours, an internal temperature of 68°C should read when probed. At this time, remove the pan from the BBQ and allow the ham to rest in the liquid for at least 30 minutes.

To smoke the ham, turn the burner of the BBQ to full. Put the smoke chips onto a piece of tin foil and place on the hot side of the BBQ – and heat until they begin to smoke, then return the pan with the ham and juice to the cold side of the BBQ and smoke for 5 minutes with the lid closed. Adjust the heat as necessary to maintain a gentle flow of smoke from the back of the barbecue. Add the meadowsweet to the smoke chips and smoke for a further 5 minutes.

Remove the ham and allow to cool. Serve with the pickled cherries.